How To Accurately Scan, Measure & Map The Underground Composition Of Your Site

Collecting site data is the starting point for every project, but the important value-add of geophysical science is combining data from multiple sources into hybrid imaging and site reports to inform our client’s engineering and commercial decisions.

Geophysical surveys are done by using one or a combination of methods to build up a detailed picture of the shape and composition of the subsurface: 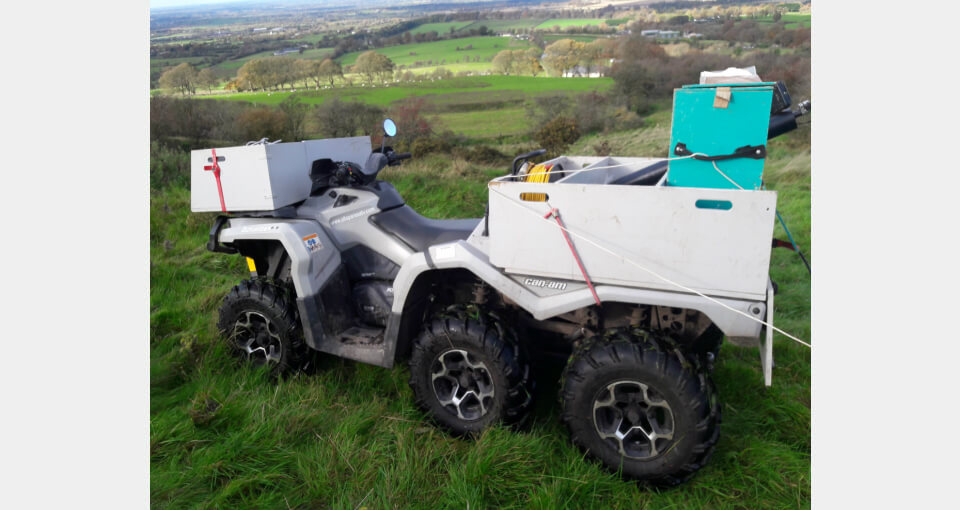 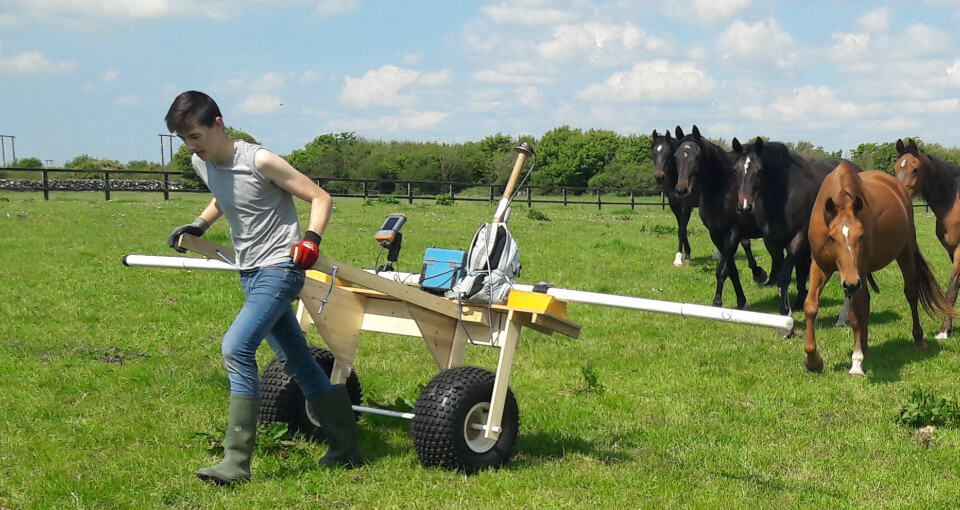 EM survey is done by instruments (EM31, EM61, EM38) that emit an electromagnetic field, measure secondary field returning from the subsurface, and then compute ground conductivity.

The conductivity can be determined along lines, on grids and at various depths, all to be set out at the survey planning stage by a geophysical consultant. The main parameters for EM surveys are frequency, coil spacing and station spacing.

Different types of soil and rock have different values of electrical conductivity, thereby giving us an opportunity to distinguish and differentiate between them. Metal objects have an extremely high conductivity thus making excellent targets for detection.

The electromagnetic conductivity of the area measured can be used to figure out things like clay content, moisture saturation, landfill material, leachate plumes, saline intrusions, variations in rockhead and homogeneity or not of ground.

The most common use is as a reconnaissance survey over grids and then to display the conductivities as contour maps or infographic visualisations.

Resistivity methods use small electrical currents that are flowing through the subsurface through small metal spikes called electrodes. Resistivity meters are measuring the electrical potential at other electrodes and determine the ground resistivity.

By using many electrodes along lines or grids the resistivity can be determined at several hundreds and up to many thousand locations in 2D or 3D arrangements within the ground. The measuring aim determines key parameters like array type, electrode spacing and location, current injection and quality settings.

Such contrasts are used in the interpretation, and the better the contrast the better for the results. Data processing consists mainly of tomographic inversion methods that give 2D cross sections or 3D cubes of resistivity that is used as an image of the subsurface. Forward modelling can be carried out as an interactive process out to solve specific quests. 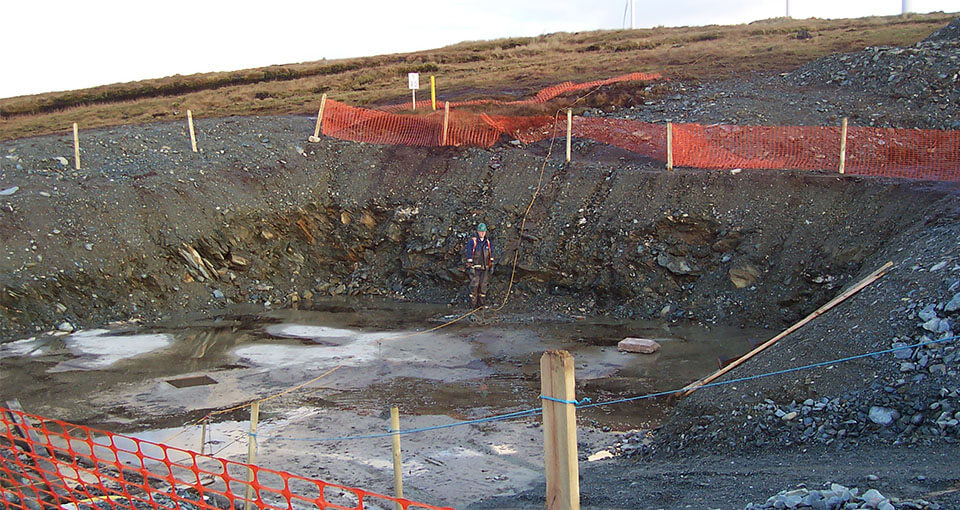 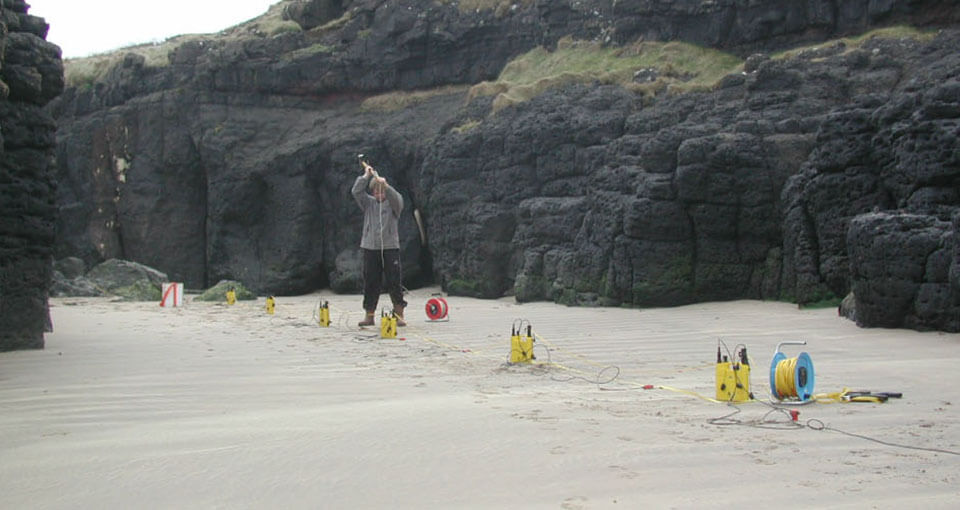 Seismic methods are measuring the velocity and movements of seismic waves through the earth, using instruments including seismographs and geophones

This is done by sending an energy pulse into the ground - using a hammer and plate,a drop weight, specialised airguns, or small controlled explosives at surface level.

An array of geophones is used to detect the seismic energy when it ‘bounces back’ and returns to the ground surface.

The design of a survey includes many settings like geophone spacing and locations, energy source type and power and frequency, ‘shot’ locations and choice of recording seismograph.

The seismic velocity is an excellent indicator for the compaction or stiffness of overburden materials and for the type and quality of rock. Other parameters linked are density and reflection coefficient and impedance.

Refraction is used mainly in near-surface work to determine the depth to rock, the rippability and excavatability of rock and for showing the thickness and stiffness of the different subsurface layers.

Reflection is used for deeper studies like mineral exploration or famously for oil and gas exploration.

A large range of processing methods and software are available, such as Tomographic Inversion, Forward Modelling and Ray-Tracing.

While the seismic data consists of a large amount of ‘squiggly lines’ the display for end-users is typically a ground model with layers.

MASW uses analysis of seismic surface waves to calculate the shear wave velocity and to determine the small strain shear modulus below the land.

The survey is similar to seismic refraction data acquisition and these two methods are often carried out together using geophones, a hammer source and a seismograph.

Surveys are commonly done as 1D or 2D measurements, in the first case creating a shear wave versus depth graph and in the second case a 2D-cross section.

The main target of this method is the overburden and especially the characterisation of very soft to firm layers. The method can be also used to test the compaction of fill material at road or other construction sites.

The data processing uses the dispersion curves for the surface waves which is an easy computer process but the correct use of this requires an enormous amount of the geophysicists’ experience. Data is displayed as graphs, sections and often tabulated for the geotechnical engineer’s use in foundation design. 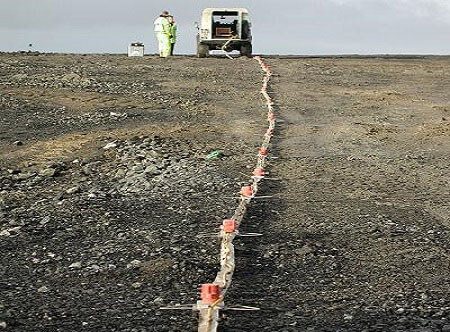 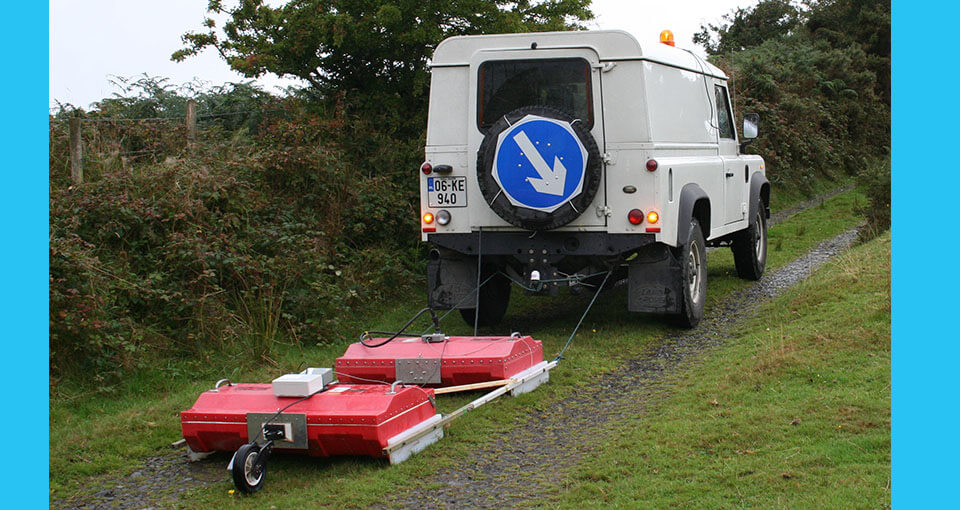 GPR works on the radar principle, but underground, transmitting pulses of radio wave energy into the ground and measuring their reflection to create a cross-section image of different materials layers, boundaries and objects under the surface.

Different radio frequencies are used for different applications - higher frequencies give higher resolution data at shallow depths, and lower frequencies can be used to get information from deeper areas below the ground.

Our strength is that we routinely use a range of GPR antennas with 100 MHz, 200 MHz, 400 MHz, 900 MHz and 1.6 GHz frequencies. Other survey parameters are the scan and line spacing for building up surveys over larger areas. GPS integration is commonly used for faster data acquisition and precise positioning

Waves are reflected from surfaces where the dielectric permittivity of the ground changes, especially at metal objects, water content changes, clay, peat and rock interfaces.

The method is routinely used to locate objects and archaeological deposits, determine peat and sand and gravel thickness, and to determine intra-rock features like karst where the rock is very shallow.

GPR data processing can use a large amount of processes like filtering, velocity analysis, modelling, migration, depth conversion leading to displays as cross section or x, y or z cuts through 3D-Data-Cubes.

Measurements for near surface geophysics are done on grids where the station spacing is the most important factor (typically 2 - 5 m). Surveys consist of several hundred stations e.g. to define a karst zone under a road corridor.

Microgravity processing uses exact elevations for several corrections and reductions to obtain Bouguer and Residual Anomalies. Inversions and forward modelling can be done to improve the ground model. Displays are generally done as contour maps with an overlaid interpretation. The values can be used to estimate the ‘lack’ or ‘deficit’ of density in the ground which can give an engineer a quantity to work with in problem remediation. 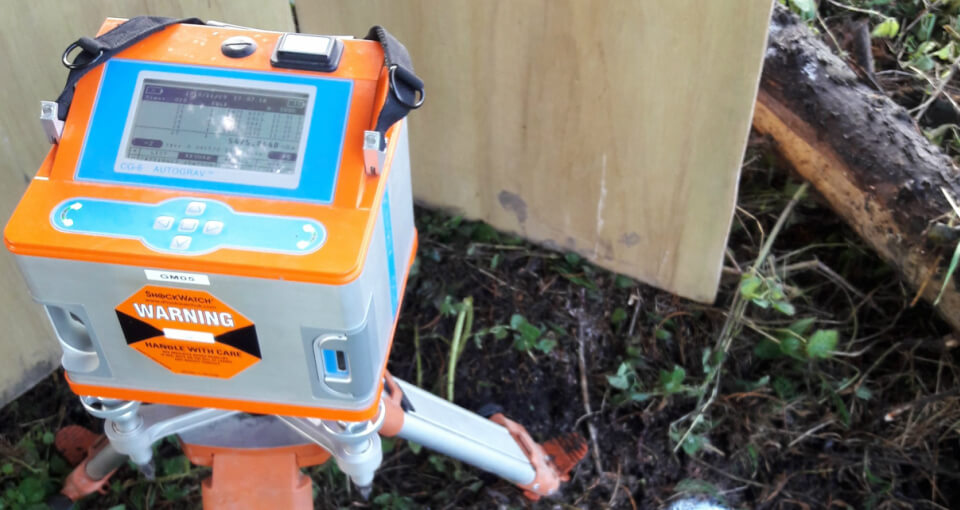 Humans have known about the magnetic properties of certain rocks for thousands of years, and developed an understanding that the Earth is in fact a ‘giant magnet’ about 800 years ago.

At the start of the industrial revolution in the 1700s, magnetic surveys were the first geophysical technique widely used to discover deposits of iron ore for mining and processing into steel and other metal alloys. It was also taken up by archaeologists to help them find relics buried close to surface level.

Today, magnetic surveying is done using magnetometers that can give detailed readings of magnetic fields, and be used along lines or in grids to do comparative measurements from point to point to give deeper and more detailed data.

Magnetometers are routinely combined with GPS for accurate positioning and speed of acquisition.

Results are displayed as graphs or contour maps to outline areas of interest and forward or inverse modelling can be done to estimate the size and depth of objects, ranging from unexploded bombs to treasures or ore bodies.

Find out more about how we create our clear, actionable site reports

And get straightforward advice about your projects...

Enter your details and we’ll be in touch within 24 hours.

For urgent issues, you can call us at