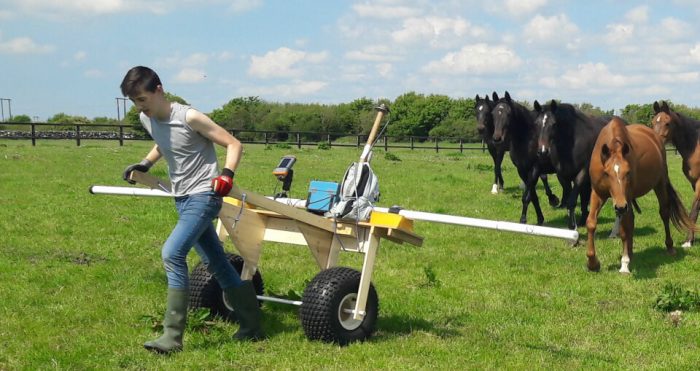 EM survey is done by instruments (EM31, EM38) that emit an electromagnetic field, measure secondary field returning from the subsurface, and then compute ground conductivity.

The conductivity can be determined along lines, on grids and at various depths, all to be set out at the survey planning stage by a geophysical consultant. The main parameters for EM surveys are frequency, coil spacing and station spacing.

Different types of soil and rock have different values of electrical conductivity, thereby giving us an opportunity to distinguish and differentiate between them. Metal objects have an extremely high conductivity thus making excellent targets for detection.

The electromagnetic conductivity of the area measured can be used to figure out things like clay content, moisture saturation, landfill material, leachate plumes, saline intrusions, variations in rockhead and homogeneity or not of ground.

The most common use is as a reconnaissance survey over grids and then to display the conductivities as contour maps or infographic visualisations.

Find out more about how we create our clear, actionable site reports.
Click the link below to get in contact.

Contact Us
We use cookies on our website to give you the most relevant experience by remembering your preferences and repeat visits. By clicking “Accept All”, you consent to the use of ALL the cookies. However, you may visit "Cookie Settings" to provide a controlled consent.
Cookie SettingsAccept All
Manage consent

This website uses cookies to improve your experience while you navigate through the website. Out of these, the cookies that are categorized as necessary are stored on your browser as they are essential for the working of basic functionalities of the website. We also use third-party cookies that help us analyze and understand how you use this website. These cookies will be stored in your browser only with your consent. You also have the option to opt-out of these cookies. But opting out of some of these cookies may affect your browsing experience.
Necessary Always Enabled
Necessary cookies are absolutely essential for the website to function properly. These cookies ensure basic functionalities and security features of the website, anonymously.
Functional
Functional cookies help to perform certain functionalities like sharing the content of the website on social media platforms, collect feedbacks, and other third-party features.
Performance
Performance cookies are used to understand and analyze the key performance indexes of the website which helps in delivering a better user experience for the visitors.
Analytics
Analytical cookies are used to understand how visitors interact with the website. These cookies help provide information on metrics the number of visitors, bounce rate, traffic source, etc.
Advertisement
Advertisement cookies are used to provide visitors with relevant ads and marketing campaigns. These cookies track visitors across websites and collect information to provide customized ads.
Others
Other uncategorized cookies are those that are being analyzed and have not been classified into a category as yet.
SAVE & ACCEPT